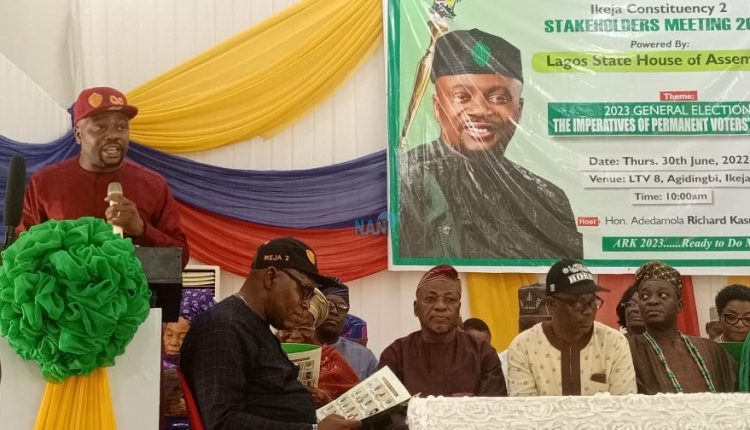 Mr Adedamola Kasunmu, (APC-Ikeja Constituency II) in the Lagos State State House of Assembly has implored residents to pick up their Permanent Voter Cards (PVCs) and endeavour to come out and vote on election day to avoid voter apathy.

The two-term lawmaker made the call
at the Eight Annual Constituency Stakeholders’ Meeting organised by the Lagos Assembly simultaneously in all the 40 constituencies of the state.

The meeting tagged: “2023 General Election: The Imperatives of Permanent Voter Cards (PVCs), was attended by all relevant stakeholders, religious and traditional rulers as well as groups in the area.

Kasunmu told the people to get registered, get their PVCs and come out to vote and protect their ballot.

“I encourage those who are yet to collect their PVCs to do so while those who have collected to exercise their franchise in the 2023 general elections.

“Your vote is your right, get your voters cards and exercise your franchise. It is your right to vote as a citizen once eligible,” he said.

He said there were plans to put machinery in place to mobilise more people to get their PVCs, the moment INEC extended the exercise.

“PVC is another opportunity for people to determine the future they want. We should vote for the government that can take us to the promise land,” Kasunmu said.

Also, Chief Danley Adedokun, an APC Chieftain, in his remarks said that the PVC registration and collection was very important as record keeping would help to build data.

“In Ikeja Local Government Area, there are about 360 polling units, if 3,000 people register and vote, the mandate of the governor as well as that of Bola Ahmed TINUBU will be actualised,” he said.

He said that individual participation was highly needed as well as preparations at
all levels for the 2023 general elections.

Adedokun said that the importance of the PVCs as mentioned in the theme was hinged on the need to ensure that people are eligible to exercise their civic responsibility.

He advised the youth to get their PVCs and ensure they vote for their choice candidates in the forthcoming general elections.

“Your destiny is in your hands. Your vote is your power, use it wisely.

“Although, some people have gotten their PVCs, the number of people who have not collected their PVCs are more than those that have got theirs. So, I encourage them to come and collect it,” he said.