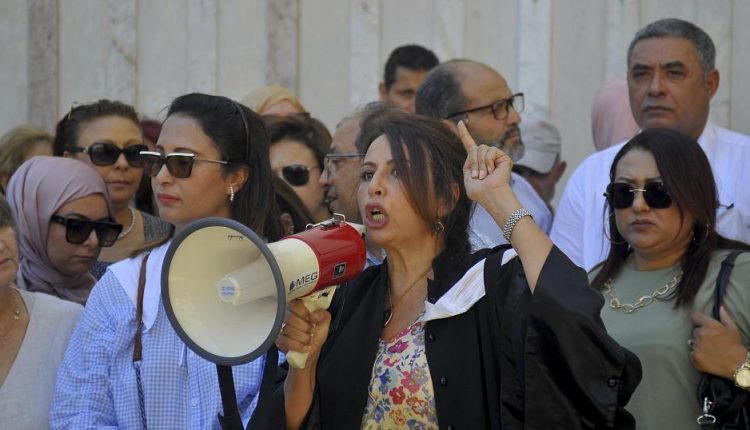 The Tunisian lawyers weeklong strike continues, judges held a protest outside the capital’s courts when dozens of lawyers and activists gathered on the steps of the Palace of Justice in Tunis.

Some shouted “Down with the coup“ and others chanted, “Judicial authority, no police orders.”

“Regarding the President’s decision to fire these judges – it’s an illegal and false decision because the decision didn’t follow the laws and rules, lawyer Amel Miladi said, those very laws are made to protect citizens, and judges, those are laws that are anchored in Tunisian constitutional law.”

In a televised address on June 1st, President Kais Saied’s removed judges accusing them of corruption, sexual harassment as well as protecting “terrorists”.

Then, hundreds of judges unanimously voted over the weekend to hold a sit-in and strike.

Since then, courtrooms across the North African country have been closed.

This move by Saied is just the latest sign of a power struggle between Tunisia’s President and the judiciary.

“For the first time since the 25th July [2020] the conflict has passed from being a conflict between the power and the opposition, to a conflict that includes the state institutions themselves“, Jawher Ben Mbarek commented. The constitutional law professor and leader of the “Tunisians Against the Coup” movement also added “The judiciary is a sovereign institution of the Tunisian state, and now it is in conflict with the President of the Republic. It’s a new development. For the first time, the state itself is resisting Kais Saied. This is new and I think this will be fatal for him.“

It’s been almost a year since President Kaies Saied sacked the government and took hold of all executive powers arguing such measure were needed to “save the country from imminent peril“ and fight widespread corruption.

However, critics have since accused him of making a grab for one man-rule and denounce an “authoritarian rule”.

If the president has proposed a national dialogue, Tunisia remains engulfed in a political crisis.

The proposed talks exclude all political parties and have been boycotted by Tunisia’s influent UGTT Trade Union.