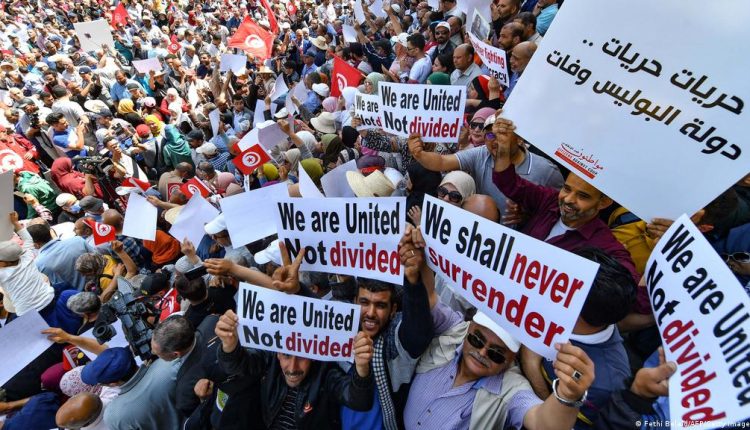 A crowd estimated 2,000, lower than expected, took part on Sunday in the first demonstration of a new alliance to oppose a power grab by President Kais Saied.

“We shall overcome,” and “We are united, not divided,” read banners of the National Salvation Front protesters gathered in front of the municipal theatre on Bourguiba Avenue, a traditional hub of demonstrations in central Tunis.

“The people want… respect for the constitution and a return to democracy,” they chanted.

Demonstrators said they were disappointed by the numbers that turned out for the first public show of support for the alliance.

“A larger crowd” was expected, said Salah Tzaoui, a 57-year-old teacher, especially by those who had lived under Ben Ali who was ousted in a 2011 popular uprising that sparked the Arab Spring revolts around the region.

Saied a former law professor elected in 2019 amid public anger against the political class on 25th July sacked the government, suspended parliament and seized wide-ranging powers.

He later gave himself powers to rule and legislate by decree, and seized control over the judiciary.

“He wants to govern alone. It’s not possible. I’m here for my children and grandchildren,” Tzaoui said.

Khaled Benabdelkarim, a 60-year-old fellow teacher who voted for Saied three years ago, said the president had “betrayed the people and stolen democracy. He has no political project, no economic project.”

Saied’s initial power grab was welcomed by many Tunisians sick of the often-stalemated post-revolution political system.

But an increasing array of critics say he has moved the country down a dangerous path back towards autocracy in what was the only democracy to emerge from the Arab Spring.

Saied has argued that the North African country’s 2014 constitution allowed him to take “exceptional measures”.