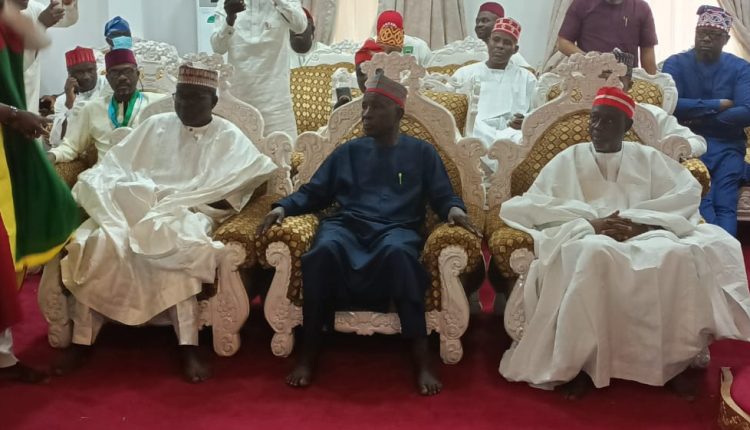 On Friday, the Presidential Candidate of the New Nigeria Peoples Party (NNPP), Senator Rabiu Musa Kwankwaso, was in Ilorin, the Kwara State capital, North Central Nigeria. Here, he sought the blessings of the Emir of Ilorin, Alhaji Ibrahim Sulu-Gambari, towards the realisation of his presidential bid.

Shortly after observing the Jumm’ah service with the Emir at the Emir’s palace, Kwankwaso said he was in the palace to seek royal blessings.

He added that he was also in the state to open some NNPP offices in Ilorin and other parts of the state and fraternise with members of his Kwankwasiyya Movement.

“We are here to pay our respect to you as our traditional father. We thank you for receiving us and for the opportunity to observe the Jummah service with you.

I also thank the people of the state for the warm hospitality. We pray Allah to continue to give our Emir long life and sound health,” he added.

He prayed for the blossom of the Kwankwasiyya movement, adding, “God will continue to guide you. I’m happy to say you are welcome.”

Sulu-Gambari assured the NNPP presidential candidate that he was in the hands of a highly influential personality in the state in the person of Professor Shuaib AbdulRaheem.

In his brief remarks, Professor AbdulRaheem thanked the Emir for the warm hospitality accorded the NNPP team.

AbdulRaheem, also the Talba of Ilorin, said Kwankwaso has all it takes to get the nation out of its hydra-headed security and socio-economic challenges.

Kwankwaso and his entourage had joined the Emir of Ilorin at the Ilorin Central Mosque with thousands of Muslim faithful to observe the two Rakat Jumaat prayers.

The Chief Imam of Ilorin, Sheikh Mohammed Bashir Soliu, who offered prayers for the presidential candidate, urged the people of the Ilorin Emirate and the entire state to collect their Permanent Voters Cards (PVCs) before the expiration date and vote for credible and God-fearing candidates.