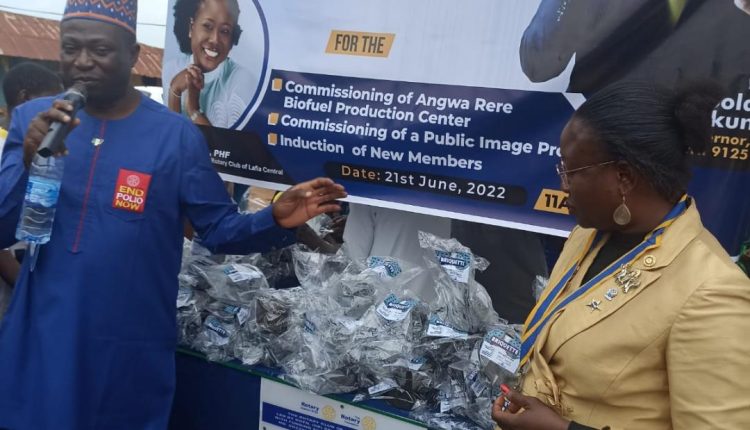 The Rotary Club of Lafia Central, Nasarawa State has donated a Biofuel Production Center to the Angwan Rere community in Lafia Local Government Area to promote clean energy and mitigate negative climate impact on the environment.

Rotn.  District Governor, District 9125, Ayoola Oyedokun, said during the inauguration in Lafia that Biofuel production is a better alternative to the use of firewood and charcoal.

According to the District Governor, the Centre will not only produce briquette for the community but will also produce them in commercial quantity to serve as a business venture to improve their socio-economic status.

“Rotary Club of Lafia Central has a unique project that is dear to me, which is the donation of a Biofuel Production Centre to the people of Angwan Rere community. The Club trained men, women and youths on briquette production.”

“We all know that Nasarawa State has banned the use of charcoal, so the Club set out to explore other alternatives to charcoal. Biofuel is an excellent alternative to charcoal because of its clean energy and it is faster in cooking.”

“I also carried out Tree Planting to encourage afforestation at Angwa rere, commissioned a Public Image project (signpost), and inducted two new members into the club. Membership is key to Rotary. These are the things that endeared me to come to Lafia” he said.

Oyedokun, called on indigenes of the state to join the club so that it could expand its reach by touching more lives in other communities. He tasked the Angwan Rere community with the prudent management of the Centre.

The President  of Rotary Club of Lafia Central, Dr Esienanwan Efiong, the Changemaker, said the Center is a Waste to Wealth project, aimed at addressing different focus areas of Rotary International- Protecting the Environment and Economic & Community Development.

The Changemaker President explained that the Club brought experts to train 20 people in the community who have in turn trained others on how to produce briquettes from converting Agricultural wastes.

“The trainees were able to produce 150 briquettes within a few days. Shortly Angwan Rere will place Nasarawa state on the map of the world as one of the producers of biofuel from agricultural waste,” she said.

Efiong called on the government and other organisations to partner with the community to expand the Centre for the commercialisation of briquette beyond Nasarawa state. She also stated the need to replicate the project in other parts of the State.

On behalf of the community, the District Head of Lafia North II and Chief of Angwan Rere community, Alh. Abubakar Musa, thanked the Rotary Club of Lafia Central for the empowerment and promised to make judicious use of the Centre for the overall benefit of the community.

The Deputy Governor who was represented by Commissioner of Trade, industry and investment, Honorable Salihu Enah Ali, lauded the excellent project by Rotary especially following the ban on the use of charcoal in the State.