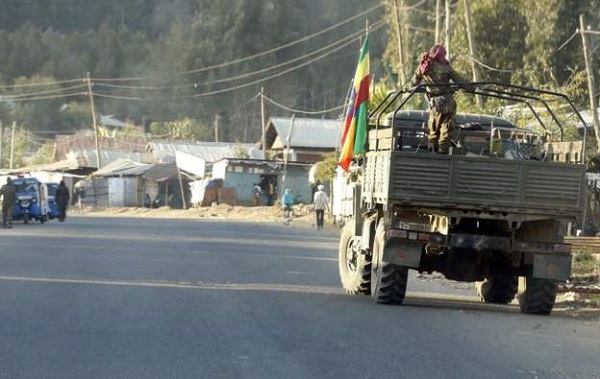 Report says Mr. Obasanjo told Financial Times last week that “all Eritrean forces” who had been fighting alongside Ethiopian federal troops in the Tigray war that broke out in November 2020 had pulled back to the Eritrean border.

However, TPLF official Prof Kindeya Gebrehiwot posted an undated picture of Eritrean soldiers purportedly in the town of Shire.

“The fact is Eritrean forces are still in Tigray, not at the borders! This recent picture shows Eritrean forces in Shire. Tigray had handed over heavy weapons, and Eritrean and non-ENDF forces should have concurrently left Tigray as per the pact,” he said.

Mr. Obasanjo’s comments were also been refuted by TPLF spokesperson, Getachew Reda who said AU officials should “do their job first before such remarks are made.”

Meanwhile, the TPLF forces have been handing over heavy arms to federal troops as part of the peace deal with Prime Minister, Abiy Ahmed’s administration.

Separately, report says that an Amhara militia group is allegedly forcing residents in a disputed area between the Tigray and Amhara regions to register as ethnic Amhara.

The Wolkayit-Tsegede region was captured by Amhara forces during the civil war leading to deadly violence.

A Day of Mass Strikes in France