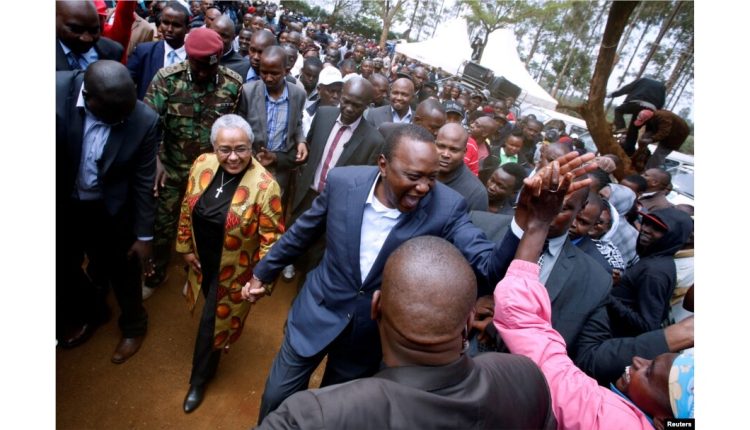 Odinga, in his address, promised to address issues of education, corruption and poverty if elected in the 9th August election.

“There are four enemies that Kenyans are struggling with: poor health, ignorance, poverty, and corruption. And I have given you my word that I will fight so hard to end these four enemies of Kenya. As Azimio we shall establish free education from early childhood to university and this will end ignorance,” said Raila Odinga.

But to many Kenyans, the high cost of living has been a burden to most of them.

Some blame it on the rampant corruption and unemployment among the people rendering them helpless.

“If you look at them, they are spending millions, billions in doing the campaigns, and some of this money has been stolen from the public. And when they come there they tell you that they are for the common mwanainchi (common man), common mwanainchi walks barefoot, and the common mwanainchi doesn’t have food to eat. the cost of living has risen so much high even the employed like us, we are crying for it, but these people are using a lot of money,” said Benard Ooko, a supporter of the ODM party and resident of Siaya.

Some supporters have questioned the high amount of money being used by different politicians to conduct their campaigns due to a lack of accountability.

“I am not happy with them spending a lot of money hiring choppers, the choppers are very expensive. Per day hiring a chopper cost about two hundred thousand shillings (2000USD) and in a day they only attend two or three rallies and they started campaigning four months ago. So they have spent billions and billions of shillings. Where are they getting that money from? It’s from the taxpayers,” said Samuel Onyango Wala, a supporter of the ODM party and resident of Siaya.

The East African economic powerhouse will hold presidential and parliamentary elections on 9th August, in the shadow of previous polls which have often been marred by ethnic violence.

With its diverse population and large ethnic voting blocs, Kenya has long suffered politically motivated communal violence around election time, notably after a 2007 poll when more than 1,100 people died.

This year’s presidential contest is shaping up to be a two-horse race between Deputy President William Ruto, 55, and 77-year-old Raila Odinga, a veteran politician and former prime minister.

Two other candidates have been cleared to contest the race to succeed President Uhuru Kenyatta, who must stand down after serving the maximum of two five-year terms.

Ruto was initially anointed by Kenyatta as his successor but has found himself out in the cold after Kenyatta and Odinga forged an alliance in 2018.

Ruto is hoping his rags-to-riches journey from street hawker to top-ranking politician will resonate with Kenya’s youth, fashioning himself as a spokesman for “hustlers” trying to make ends meet in a country ruled by “dynasties”.

The Kenyatta and Odinga families have dominated Kenyan politics since independence in 1963.