Premier League champions Manchester City began its title defence brilliantly after claiming a comfortable 2-0 victory against West Ham, courtesy of a double from new signing Erling Haaland on his debut, at the London Stadium in England.

City started with Haaland in attack, with Jack Grealish and Phil Foden supporting on the flanks. The hosts featured Michail Antonio up front, while Jarrod Bowen and Pablo Fornals were on the wings as they looked to cause an upset.

The visitors had a chance to open the scoring when a lovely pass from Ilkay Gundogan found the clever run of Haaland, who was fouled by substitute goalkeeper Alphonse Areola. The referee pointed to the spot and the Norwegian international Haaland stepped up, and calmly placed the ball into the net to open the scoring.

In the second half, West Ham midfielder Declan Rice skied a good chance over the bar after a Gundogan error early. Some uncharacteristic misplaced passes from Manchester City gave the Hammers a glimmer of hope for an equaliser.

However, Kevin De Bruyne’s defence-splitting pass found Haaland who latched onto the ball and slotted home his second goal of the match in the 65th minute, putting Manchester City in a commanding position.

Haaland becomes the second striker to score twice on their City debut, matching Sergio Aguero’s feat in August 2011. He celebrated in front of the City away section where his father Alf-Inge Haaland, who played for Manchester City in past, was supporting from.

The champions outclassed West Ham from start to finish as they eased their way to a comfortable 2-0 victory thanks to a double from Haaland. Although Manchester City started slowly and almost went behind through Antonio, they later took control of the game. 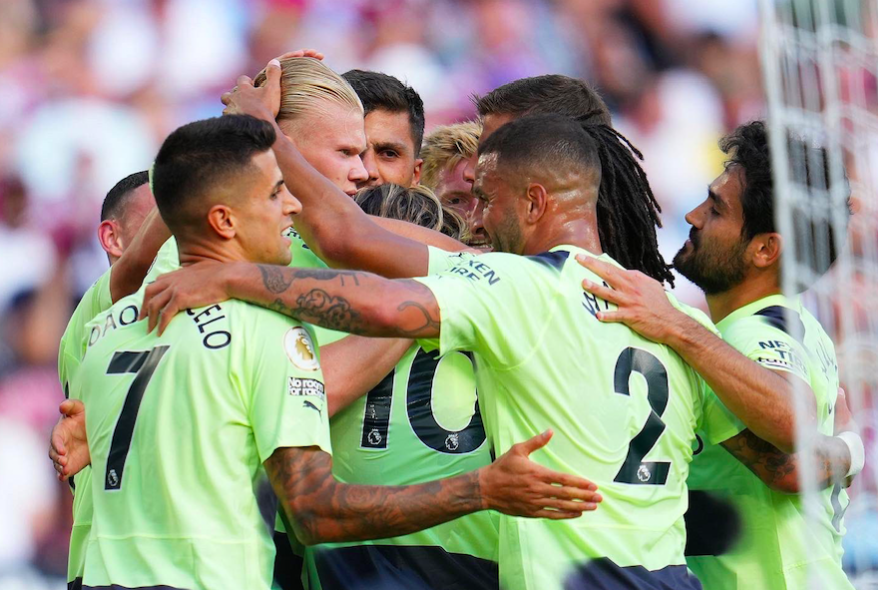 “It was good, a good start and it’s nothing much to say but a good start 2-0,” Haaland said after the match. “Good to get minutes in the legs because it’s still early in the season. We have to keep going.”

Manchester City return home to host Bournemouth next Saturday, while West Ham will visit Nottingham Forest away from home on Sunday.