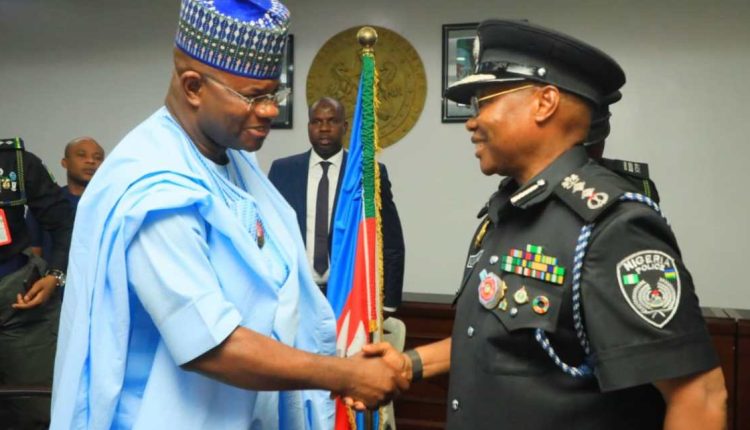 Inspector General of Police (IGP), Usman Alkali has undertaken an assessment visit to Kogi state, north Central Nigeria, to check the security situation in the state.

IGP Alkali, during the visit, paid a courtesy visit to the state Governor, Yahaya Bello, where he commended the Governor for managing crimes and criminality in the state.

He noted that crimes and criminality were being effectively managed on daily basis between Abuja and Kogi with the full support of the governor as the executive officer.

“My sincere gratitude and appreciation to the governor for always coming to us and supporting us in respect to security matters in Kogi. I have never heard the governor crying and saying I don’t have control of security. This is because the governor is able to galvanise, synergise, collaborate and cooperate with all the security agencies. Security is everybody’s business; neighborhood, community, township and state policing and we have a leader who is leading it the front; that is what is happening in Kogi,” he said.

He, however, noted that there was room for improvement and much more to be done, saying that people “have responsibility as citizens to collectively protect themselves and community”.

In his remarks, the governor appreciated Alkali for the visit and commendation, while praising him for his good work since he took over as police boss.

Bello explained that security was at its lowest ebb when he took over as executive governor in 2016, but with his commitment and strong determination, insecurity had been reduced to its barest minimum.

“While I will continue to play my own roles as the governor of all, I intend to ensure the safety of all too, irrespective of political affiliations.

”We will, therefore, deal with peddlers of insecurity under any guise whatsoever, and no matter how highly placed,” Bello said.

The governor noted that the joint activities and combined bravery of the personnel of various service commands in Kogi State working together to provide security had given him and the administration outstanding recognitions across the country.