Senegal’s star forward Sadio Mane has been voted Africa’s Men’s Player of the Year at the 2022 CAF Awards, after leading the Teranga Lions to its maiden Africa Cup of Nations (AFCON) title.

The Senegalese international retains the CAF African Player of the Year title, having also won the 2019 edition: the previous edition. He has recently left England’s Liverpool after a trophy-laden spell with the Reds, becoming the German Bundesliga’s marquee player after signing for Bayern Munich.

It was a highly successful night for Senegal who were also named National Team of the Year for their heroics in the 2022 Africa Cup of Nations.

Coach of Senegal’s national football team, Aliou Cisse, was named Africa’s Coach of the Year at the glittering function in the Moroccan capital of Rabat.

To top off a huge night for the Teranga Lions, Tottenham Hotspur midfielder Pape Matar Sarr, was named Africa’s Young Player of the Year.

Sarr made his international debut as an 18-year-old and was part of Senegal’s AFCON 2021 winning team.

The future is here!

The awards were held at Morocco’s impressive Mohamed VI Technical Centre in Sale, Rabat and attended by a gathering of Africa’s top football personalities and football stars.

Morocco’s Wydad Athletic Club were rewarded for their CAF Champions League 2022 win by being named Africa’s Club of the Year in the men’s section.

THEY DID IT AGAIN!

The men’s Interclub Player of the Year was won by legendary Al Ahly and Egypt goalkeeper and captain, Mohamed El Shenawy.

The best of the best!

It was another Senegalese player in Simba’s Pape Ousmane Sakho who won CAF’s Goal of the Year in the mixed category for men and women,

Sakho won the award for his spectacular overhead strike for Simba against Asec Mimosa in a CAF Confederation Cup group game.

OUT OF THIS WORLD!

The 2022 CAF award was attended by a gathering of Africa’s top football personalities and football stars, with the CAF President Patrice Motsepe also in attendance. 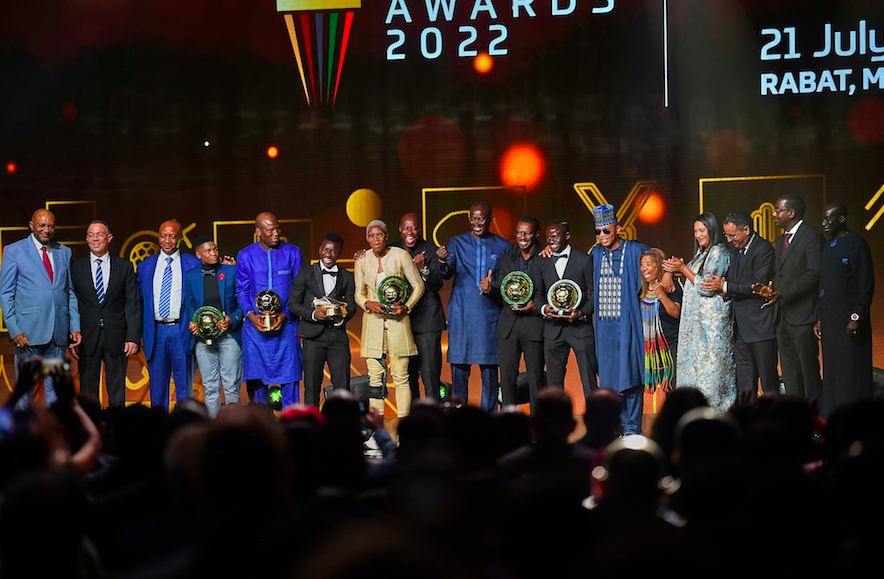 Player of the Year – Sadio Mane (Senegal and Bayern Munich)

National Team of the Year – Senegal