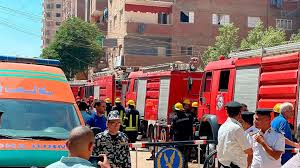 At least 41 people were killed when a fire broke out in a Coptic church in the densely populated Cairo suburb of Imbaba.

“Suffocation, suffocation, all of them dead,” said a distraught witness who only gave a partial name, Abu Bishoy.

Egyptian media, quoting eyewitnesses, reported that the fire started after a power outage at the church caused an electrical generator to turn lights and air conditioning units on, triggering a short circuit in one of them.

Prime Minister Mustafa Madbouly, along with General Ahmed Rashed, the governor of the Giza province where the church is located, went to the scene of the fire. They presented the government’s condolences along with pledges to help the families of the victims.