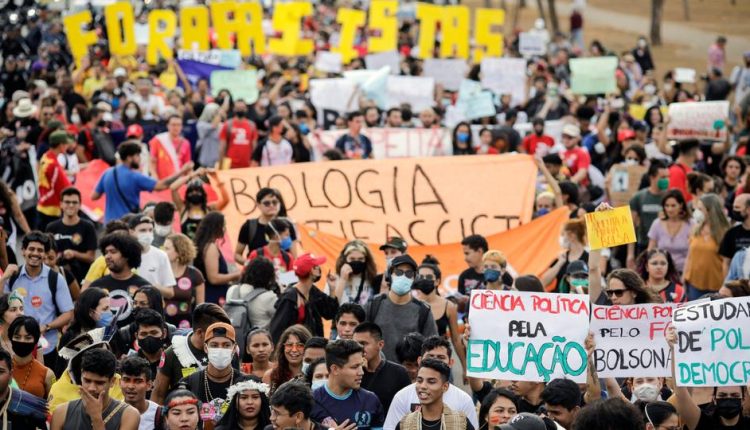 Thousands of Brazilians have Protested in several cities in defense of democracy over fears President Jair Bolsonaro will try to stay in power even if he loses October’s election.

Crowds protested in Rio de Janeiro, Brasilia, and Recife, while thousands gathered outside the University of São Paulo, where a petition “in defense of the democratic state of law” was read out.

People held up banners denouncing Mr. Bolsonaro and proclaiming “respect the vote, respect the people”, while some were dressed as electronic voting machines, in a reference to the president’s cheating claims.

He has claimed that electronic voting machines enable cheating, because of the absence of a paper trail.

A year ago, Mr. Bolsonaro tried to change the system to introduce printed ballot papers, but the proposal was defeated in Congress.

Critics of the president have voiced fears that he is preparing to follow the example of former US President Donald Trump and allege widespread fraud if he loses the election.

Also read: Nigeria Partners with Brazil on Supply of Tractors To Farmers

The demonstrations came on the same day that a citizens’ manifesto was read out and signed by a million Brazilians.

The manifesto, inspired by a declaration from 1977 denouncing Brazil’s dictatorship at the time, warned that the country’s democracy was facing great danger.

The president, in office since 2019 and flagging in opinion polls, denounced the petition, tweeting that the constitution was the only letter that mattered in guaranteeing democracy.

Several of his election rivals have signed the petition, including leftist ex-president Luiz Inacio Lula da Silva, who tweeted: “Our country used to be sovereign and respected. We need to get it back.”