The African representatives for the 2022 FIFA World Cup in Qatar has been concluded as Cameroon, Tunisia, Morocco, Ghana join AFCON champions Senegal, after emerging victorious in their various qualification playoff matches.

Here is a summary of how the exciting return leg matches concluded.

Ghana qualified for their fourth World Cup after edging out Nigeria on the away goals rule, following a 1-1 draw in Abuja. 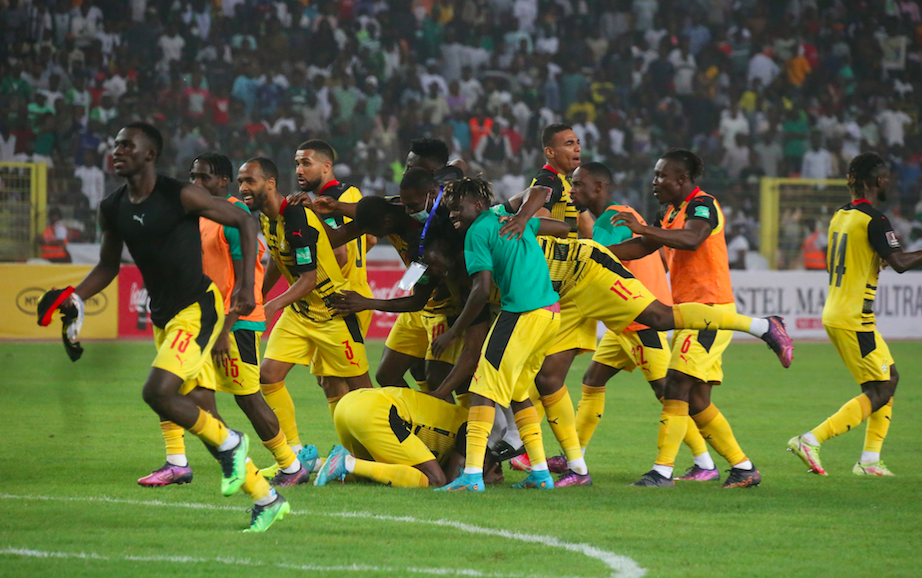 The two sides drew 0-0 in the first leg in Kumasi last week and heading into the return fixture, the Ghanaians only needed a scoring draw to progress.

Thomas Partey had given Ghana an 11th minute lead, before William Troost Ekong levelled for the Super Eagles in the 22nd minute. The Super Eagles thought they had grabbed the lead in the 34th minute but Victor Osimhen was flagged down for offside and the decision was confirmed by VAR.

In the second half, Ghana managed to soak in the pressure from Nigeria and held on till the final whistle to progress.

BACK ON THE GLOBAL STAGE

are #WorldCup bound again for the fourth time in history ⭐#WCQ | @GhanafaOfficial pic.twitter.com/PGnOYwfki7

In regulation time, Senegal had scored in the fourth minute as Boulaye Dia made the most of a defensive error to score and level the tie on aggregate. The 1-0 scoreline on the night would stay till the end of 90 minutes and additional 30, prompting the game to be decided on penalties.

Once again, it was Sadio Mane who scored the decisive kick as Senegal progressed to the World Cup for the third time in their history.

Senegal secure their spot in the #WorldCup for the second successive time #WCQ | @Fsfofficielle pic.twitter.com/fE7im18fcB

The Atlas Lions were in emphatic form against the Congolese at the Stade Mohamed V in Casablanca, winning 4-1 on the night and 5-2 on aggregate to sail into their sixth World Cup appearance.

Azzedine Ounahi scored a brace with Tarik Tissoudali and Achraf Hakimi adding one each to the massive victory. Ben Malango scored DR Congo’s only goal, but it was mere consolation as the Moroccans sailed through with ease.

Karl Toko Ekambi swept home perhaps the most important goal of his career, scoring in the fourth minute of added time as Cameroon beat Algeria 2-1 in Blida to qualify for their eighth FIFA World Cup. The two teams played to a 2-2 aggregate score, but Cameroon qualify to Qatar on the away goals rule.

The game was forced to extra time after a 1-0 score-line to Cameroon in the regulation 90 minutes. Skipper Maxime Choupo Moting scored the lone goal for Cameroon, slamming the ball home after keeper Rais M’Bohli dropped a corner right at his feet.

In extra time, Algeria thought they had scored a vital goal when Slimani netted from a cross on the left. However, Algeria’s celebrations were cut short by the VAR, with the Algerian forward adjudged to have handled the ball as he headed the ball in.

Algeria then scored two minutes to the end when Ahmed Touba headed home Rachid Ghezzal’s corner, but the Indomitable Lions had the last laugh. Ekambi swept the ball home inside the box after Michael Ngadeu headed down the ball for him to send Cameroon through to the World Cup finals.

After missing out in 2018, Cameroon are heading back to the #WorldCup #WCQ | @Fecafootofficie pic.twitter.com/hQBUYZApbd

Elsewhere, Tunisia completed the roster of five for African teams to Qatar despite being held to a 0-0 draw by Mali at home.

The 1-0 victory they picked in Bamako last week proved to be vital, as the Carthage Eagles progressed to their sixth World Cup appearance.

Tunisia are going to the #WorldCup for the second time in a row (and their 6th overall)! #WCQ | @FTF_OFFICIELLE pic.twitter.com/qVPzol34yR