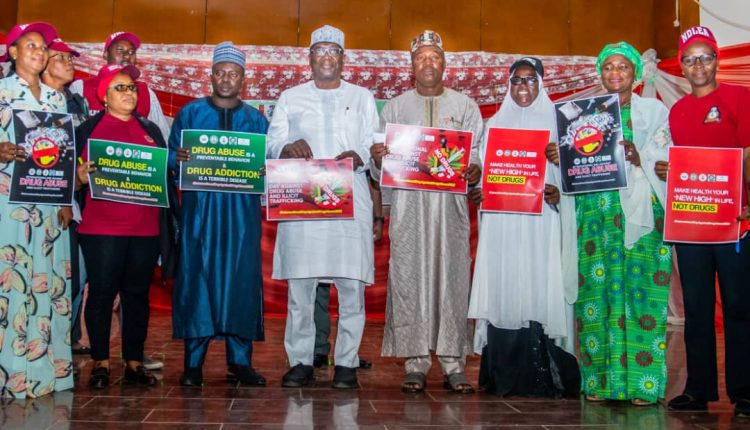 The Kwara State Governor, AbdulRahman AbdulRazaq has urged young people to stay away from drug abuse and be good ambassadors of their families and society.

The theme of the event was “Addressing Drug Challenges in Health and Humanitarian Crises.”

The Governor said; “Drug abuse ruins lives, families. I thank the NDLEA, the government bodies and Office of the First Lady for putting this together. It clearly shows that the agency is alive to its responsibilities. The main message here is: say no to drug abuse. There is nothing good that comes out of illicit drugs. It destroys you as a person; it destroys your family and your communities, and it undermines the government.”

“All tiers of government, national and sub-national, spend a lot of money on drug control. Governments spend billions on the NDLEA to make sure they work effectively,” Governor AbdulRazaq stated.

He commended the leaderships of the Agency both at the Federal and State levels for their proactive steps and campaigns against the abuse of drugs.

The Governor also pledged continuous support for the NDLEA and other relevant bodies to check the crime and mitigate its effects in the society.

He said; “We specially thank General Buba Marwa (rtd.) for the work he has been doing since he got in. We have seen a lot of changes and proactiveness. He has left a landmark from what it used to be, with his experience and the capacity brought to the Agency. I equally commend the Corp’s Commander in the State for actively engaging key sectors to win the fight against drug abuse.”

Governor AbdulRazaq also thanked the traditional rulers for their immense contributions to make their communities crime-free, and the various companies that supported the event.

The wife of the Governor Olufolake AbdulRazaq said her office is involved in many activities and campaigns designed to curb drug abuse in the State.

Represented by the State Commissioner for Health, Dr. Raji Razaq, she urged parents and religious leaders to intensify their efforts to dissuade younger ones from drug misuse.

Represented by Dr. Garba Suleiman, the CMD said governments must intensify the ongoing anti-drug campaigns and take extra measures against the proliferation of shops that sell illicit substances.

Dr. Suleiman said that the effects of drug abuse were devastating and encouraged the addicts to do away with it, citing health hazards, financial crisis and criminal tendencies as major outcomes.

The Chairman, Nigeria Youth Council of Nigeria, Nasir Yusuf blamed poor parenting and nonchalance of some community leaders for the wrong exposure of youths to hard drugs.

He urged relevant stakeholders to play their parts in checking the trend.

Yusuf applauded the efforts of the present administration in the State on youth engagement and how they are being empowered to fulfil their life dreams.

The event, which featured drama and musicals around the drug fight, was well-attended by prominent personalities and cabinet members, including the Wife of the State Governor,  Ambassador (Dr.) Olufolake AbdulRazaq