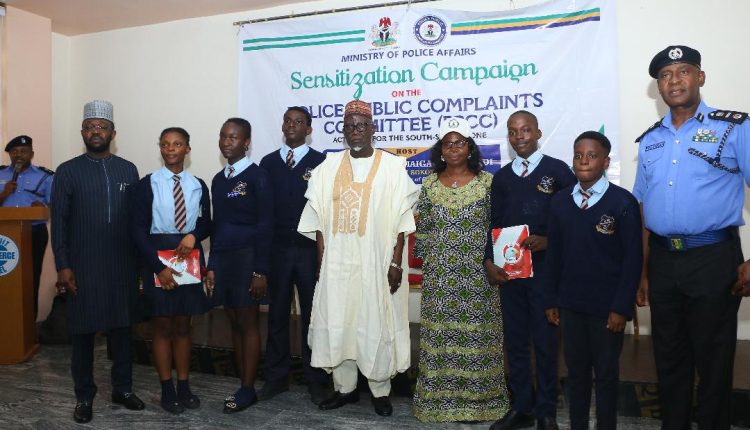 The Honourable Minister of Police Affairs, Mr. Muhammad Dingyadi has reiterated  commitment to advance technology-led policing in line with global best practices and the need to deepen community policing and human intelligence in Nigeria.

Mr Maigari made this known during a sensitization campaign on the Police Public Complaints Committee (PPCC) activities for the South-South zone held at the Adsuits Hotel, Calabar, Cross Rivers state.

The Minister pointed out the merit in broadening policing endeavors from the traditional approach to a more encompassing and community-led Policing strategy, which requires active citizen participation and a high level of confidence in the Nigeria Police

In his words, “the far-reaching benefits of deepening the realization of a people-centric and collective security paradigm, through the reformation of our policing architecture, and creation of additional layer for citizens to seek redress, necessitated the resuscitation of Police Public Complaint Committee, in the year 2019”.

He added that the strengthening of the newly resuscitated Police Public Complaints Committee, to eliminate all forms of subjective narrative, which hitherto hindered cooperation between police and citizens, is coming at a time our nation is in dire need of citizen support to collectively fight crime and criminalities.

According to him “following the directive of Mr. President, I inaugurated the resuscitated Police Public Complaints Committee in Abuja on 7th April 2021, to among others bridge the gap between the police and the populace to elicit sustainable confidence and mutual cooperation. We are here today, to sensitize the public, on the Police Public Complaints Committee (PPCC), being an initiative taken by the Federal Government to enlighten the public on measures to enhance Police-Public Relations in Nigeria”.

Dingyadi said Public Complaints Commission deals generally with all kinds of complaints against administrative injustices by public institutions adding that the Police Public Complaints Committee, is created as a specialized institution to deal strictly with public complaints against Police Infractions. It is important to point out, that this strategy is already in operation in many advanced nations. He stressed.

The Minister noted that the overriding objective of the PPCC is to serve as a platform that has oversight on the activities of Police Personnel viz-a-viz their interaction with the public.

In his goodwill message, the Deputy Chairman, National Youth Council of Nigeria, Cross River Chapter, Engineer Joel Henshaw thanked the government for creating the PPCC noting that the youths are most affected by the activities of the police officers.

He said the initiative will change the narrative of infringement of the rights of the youths and serve as a medium for appraisal of the activities of the policemen in the field.

The Secretary, Christian Association of Nigeria (CAN), Cross River State, Rev. (Dr.) Emmanuel Orok Duke said that CAN has an important role to play and is very concerned about Human Rights and ready to partner with the government to ensure that citizens live in peace in the country.

In his words, “the issue of security is a concern of all, we pray to God to transform us. The crisis of insecurity and tramp on Human Rights is in our nature and habit, we continue from the pulpit to engage with others that every citizen should respect civil authority and also encourage our faithful to respect the law of the land and if anybody among us falter against the law should be ready to be reprimanded”.

The representative of the Inspector General of Police, AIG in charge of Zone 6, Assistant Inspector General (AIG), Kamorundeen Okunlola stated that PPCC is very important to the Police ecosystem and IGP resolved to bring the police closer to the people.

According to him, “there is the need for synergy to bridge the gap between police and citizens. People need to be educated on the importance of cooperation and the sensitization campaign by the Ministry will assist us to understand that we need each other.