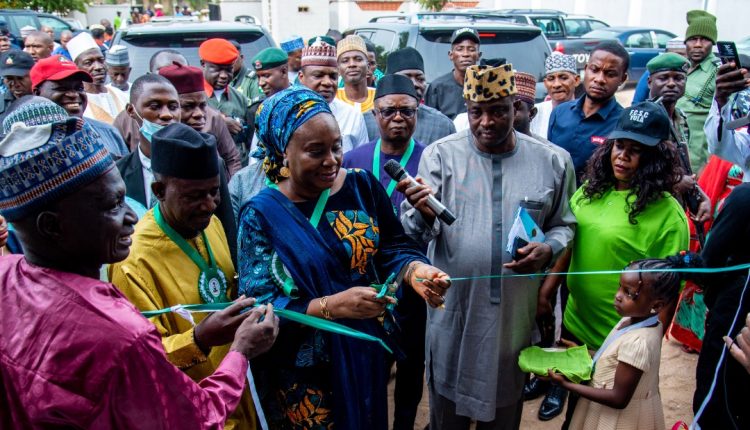 The Head of the Civil Service of the Federation Dr. Folasade Yemi-Esan, CFR has encouraged Civil Servants to seek for activities that will promote peace, unity and tolerance for one another toward a better Nigeria.

She stated this at the commissioning of a newly built Federal Civil Service Club, which was named after her in Yola, Adamawa State, Northeast Nigeria.

According to her, Civil Servants, who work very hard towards ensuring the growth and development of the nation, need good facilities, as well as conducive environment to relax and interact amongst themselves after work, hence, the approval to rehabilitate and build, where necessary.

She further noted that Civil Service Clubs are also meant to uplift the image of the Service, while giving Civil Servants a sense of pride and comradeship, which it is known for while urging the Civil Servants to maintain their confidence by constantly improving themselves, by being dynamic.

Dr. Yemi – Esan further urge stakeholders of the Civil Service Club in Yola to ensure that activities in the Club are dignifying, so as to attract as many personalities as possible for increased patronage that will yield revenue for the Federal Government.

She added that Civil Servants should think out of the box and partner with Institutions within the State, in order to maintain, as well as keep the Club vibrant.

Earlier, the Permanent Secretary, Service Welfare Office, disclosed that the rebuilding of the Club marks the reawakening of supervisory role of the OHCSF, adding that through the efforts of the HoCSF, the Federal Civil Service Clubs, nationwide, now have a budget.

While calling on the Managers of the Club to be innovative, she implored Federal Civil Servants in Adamawa State to take ownership of the project, maintain, as well as sustain it.

The Chairman, Federal Civil Service Club, Adamawa State, Mr, Mohammed Aminu Sambo, disclosed that the intervention by the Head of Service was unprecedented, which necessitated the naming of the Club after her.

The call was made at the 44th Meeting of the National Council on Establishments holding in Yola, Adamawa state in North-East Nigeria.

The 44th Meeting of the National Council on Establishments, Chaired by Dr. Folasade Yemi-Esan, CFR, Head of the Civil Service of the Federation opens in Yola, Adamawa State on Thursday 8th December, 2022. pic.twitter.com/A1KLRQKp7u

The Officials of the Council made up of Permanent Secretaries in charge of Establishments and related matters from the thirty-six (36) states of the Federation, including the Federal Capital Territory were present to deliberate on issues concerning the Public Service for the purpose of advancing the cause of the Service towards ensuring accelerated national development.

The Head of Service who was represented by the Permanent Secretary, Service Policies and Strategies Office (SPSO), Office of the Head of the Civil Service, Mr. Okokon Ekanem Udo, emphasised on the roles of repositioning the Service for better and quality service delivery.

“It is our responsibility to facilitate informed decisions on establishments and other related matters in order to enhance industrial harmony, efficient and effective service delivery for the wellbeing of the citizenry, and facilitate sustainable economic growth and development. It is our duty to protect the image and interest of both the Public Service and Public Servants,” he added.

Mr Udo, encouraged the states to commit more time, efforts and other resources to the acceleration of capacity building and talent management through training and retraining of staff, leadership management and succession planning; institutionalization of performance management system to replace APER as well as as improvement in Integrated Personnel Payroll Information System (IPPIS) – Human Resource (HR) Module to achieve a clean payroll.

Others are the institutionalization of innovation; acceleration of digitalization of content services to improve work processes and fast-track decision making; enhancement of value proposition for Public Servants through a comprehensive package of staff welfare programmes such as housing loan, transport scheme, salary harmonization, reward and recognition, which the Federal Civil Service is currently implementing to boost national growth and development.

While expressing optimism on the high level of seasoned Technocrats present at the Meeting, the Permanent Secretary, urged the participants to look at the memoranda objectively and make dispassionate  recommendations that will guide the Council in taking informed decisions that will transform the Service.

US to impose new sanctions against Russia, China