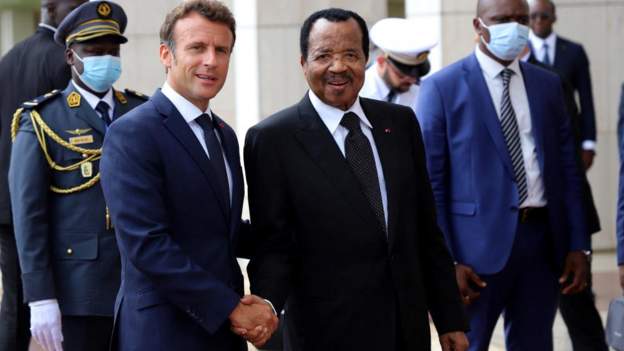 The French President, Emmanuel Macron has arrived in Cameroon and has begun his three-nation tour of Western Africa

It’s Macron’s first foreign trip since his re-election as he seeks to reboot France’s post-colonial relationship with the continent.

Cameroonian Prime Minister, Joseph Dion Ngute was at the airport to receive him.

Macron is due to hold talks at the presidential palace with his counterpart Paul Biya, who has ruled Cameroon for nearly 40 years.

The two leaders will discuss security in Cameroon, which has been riven by ethnic violence and an insurgency by Anglophone separatists who have been fighting for independence for two English-speaking provinces since 2017.

On Wednesday, Macron travels to Benin, followed by Guinea-Bissau on Thursday.