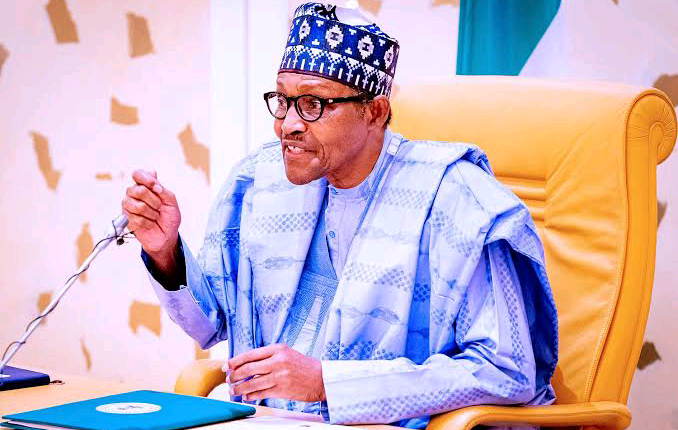 President Muhammadu Buhari has called on the people of the Niger Delta region of Nigeria to exercise restraint and allow a conducive atmosphere for implementation of the several government developmental Projects and Programmes initiated for the area.

President Buhari made the appeal on Thursday, in Abuja at the opening of a two day Management retreat organised by the Ministry of Niger Delta Affairs and held at the Banquet hall of the Presidential Villa, Abuja.

The President, who noted government’s huge commitments to the region to give the people a new lease of life said his administration was poised to implement more prudent policies and programmes aimed to bring about a better Niger Delta region.

President Buhari said, “I urge all well- meaning Nigerians, especially the Niger Deltans, to exercise restraint and ensure a conducive and secured environment for implementation of the several developmental Projects and Programmes in the Region.”

He particularly cited the ongoing East-West Road Project, which he said was one of the largest infrastructures in Nigeria, and “strategic” in connecting the Country’s busiest and foremost Commercial Cities, in the Region.

He noted that the project was a priority to the Administration and assured it would be completed before the end of his tenure as President next year.

He directed the Nigeria National Petroleum Corporation (NNPC) Limited and its subsidiaries to step in, with a view to fixing the Section 4 of the East West Road (Eleme Roundabout to Onne junction in Rivers State) through the Tax credit Scheme.

“This should be expeditiously addressed considering the importance of the road to our national economy,” he stated.

President Buhari hinted of government’s plan to constitute a new board for the Niger Delta Development Commission (NNDC), while acknowledging receipt of the forensic audit report on the commission earlier called by the Governors of the South-South region.

To this end, the President disclosed that his government has already begun a phased implementation of the recommendations submitted.
“In pursuance of our determination to curb corruption and in response to the call of the Governors of South-South for a Forensic Audit of NDDC, I undertook some critical reforms and requested a Forensic Audit of NDDC from inception to 2019.

“The Report of the Audit has been submitted and implementation of its recommendations has commenced in phases. This process will soon usher in a new Management and Board for the Commission,” he said.

President Buhari also mandated the Permanent Secretary in the Ministry of Niger Delta Affairs to carry out a comprehensive Staff Audit of the Commission.

He said the Permanemt Secretary should ensure that, Right Staffing and Proper Placement was achieved.

He noted that the significance of the retreat could not have come at a better time, especially, post Forensic Audit of the NDDC.

President Buhari said concerted efforts are on by the authorities to reposition the Commission for better service delivery in accordance with the provisions of the Public Service Rules, the Financial Regulations and the Public Procurement Act.

The Nigerain leader was represented by the Minister of Transportation, Muazu Sambo.

Minister of Niger Delta Affairs, Umana Okon Umana assured of the ministry’s readiness to utilize the remaining few months left in the life of the administration to impact and facilitate concrete development of the Niger Delta area.

The Minister also called on stakeholders in the region to extend hand of fellowship and partner with the government with a view to consolidating on the gains so far achieved to improve the living standard of the People of the Region.

“There is an urgent need to constantly adapt to new strategies to help President Muhammadu Buhari reposition the Niger Delta Development Commission to achieve the desired objectives of his administration for the Region. This entails shifting our approaches; modifying our institutions and systems to deliver better infrastructural and socio-economic development for the good people of the Niger Delta Region,” he said.

The Minister said the forum would take major decisions towards effective collaboration to derive value for money in the developmental initiatives by all the Stakeholders in the Region.

The expanded retreat had the Governors of Oil Producing States, Chairmen of the relevant Committees of both the Senate and House of Representatives, Oil Companies, Ministries, Departments and Agencies in attendance.