Rivers United head coach Stanley Eguma was full of praise for his opponents Kano Pillars as well as his players after his side’s 1-0 victory to reach a record 74 points in the Nigeria Professional Football League (NPFL).

The Pride of Rivers were confirmed as champions last weekend in spite of a loss to Nasarawa United, but they never let their guards down despite Kano Pillars’ stiff resistance in the MatchDay 36 game at the Adokiye Amiesimaka Stadium in Port Harcourt, Rivers State.

Pillars goalkeeper Joshua Enaholo especially was a stumbling block for Eguma’s men, denying the hosts on a number of occasions but he could do nothing to prevent Ebube Duru’s 94th minute penalty.

While the win meant Rivers United surpassed their previous record created in 2011 as Dolphins (also with Eguma the head coach), it meant that Pillars remain above the relegation zone, only on goals difference. Eguma felt sympathy for his opponents after the final whistle but congratulated his players for a job well done.

“It was a hard-earned victory for us and I must commend Pillars for their effort. They really did well to contain everything we threw at them and it almost paid off but for the last minute effort our boys made to get that penalty,” Eguma said after the game.

Eguma also spoke on his own satisfaction at winning another league title especially on another record-breaking note.

“This is a record we set in 2011 as Dolphins Football Club, today we have come back to break it again. It’s a milestone in the profession and for me it’s a big achievement,” Eguma added.

“For the players too, it’s a big achievement because most of them have not won the league before so it’s an opportunity for them to become champions.”

Pillars will journey to Jos to face Nasarawa United in their next league game of the season, before rounding off their season against Shooting Stars in Kano.

For Rivers United, they end with an away game at Shooting Stars and Gombe United at home on the final day when the trophy will be presented to them. 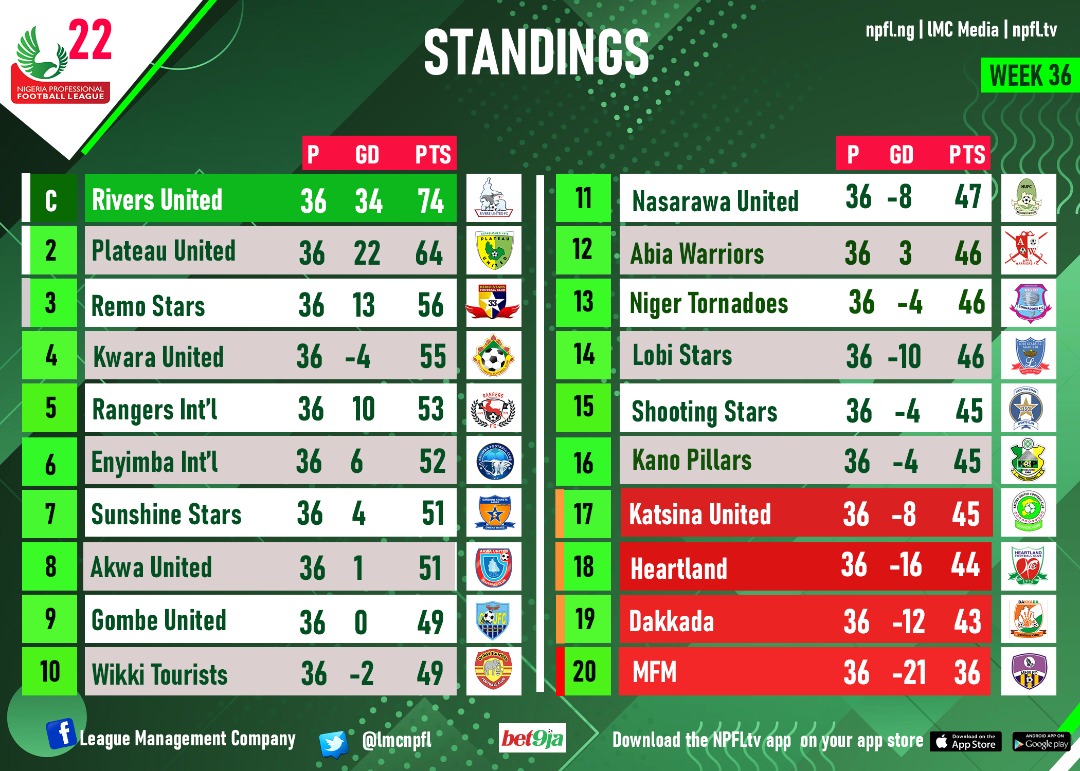 MFM Becomes First Team To Be Relegated From NPFL