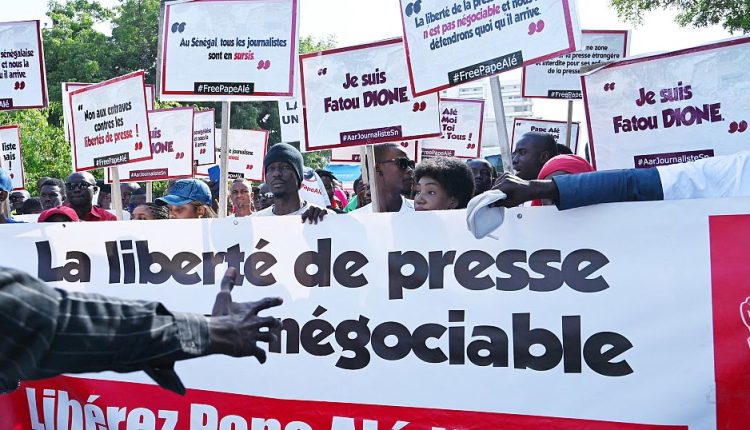 Hundreds of journalists and political activists demonstrated, in Senegal’s capital to demand the release of a Senegalese journalist and government critic detained earlier this month.

Niang, who runs the online news website “Dakar Matin” and has been critical of President Macky Sall’s government, was arrested on 6th November.

He was charged and placed under a detention order on 9th November.

He is accused of having broadcast confidential messages about security arrangements surrounding the 3rd November interrogation of opposition politician Ousmane Sonko over allegations of rape.

Vice-president of the convention of young reporters of Senegal, Migui Marame Ndiaye, said: “We mobilised this afternoon to demand his release”.

“Pape Alé Niang’s place is not in prison but in the newsroom. That is why we will lead the fight. We are going to fight for the release of our colleague Pape Alé Niang who has only done a service to Senegalese democracy, he has only done his job normally.”

His detention has sparked a wave of criticism from the press and civil society against the Senegalese president.

Journalist and activist, Nina Penda Faye, said: “We have also made it known to the State of Senegal, to the Senegalese government, that it was out of the question that in 2022 there are still Senegalese, journalists precisely who are imprisoned for press offences. We want this to stop and we ask the State of Senegal, we ask mainly our leaders to release all hostages including Pape Alé Niang who was detained for press offences.”

Senegal has been ranked 73rd out of 180 countries on this year’s World Press Freedom Index compiled by Reporters Without Borders, down 24 places from last year.