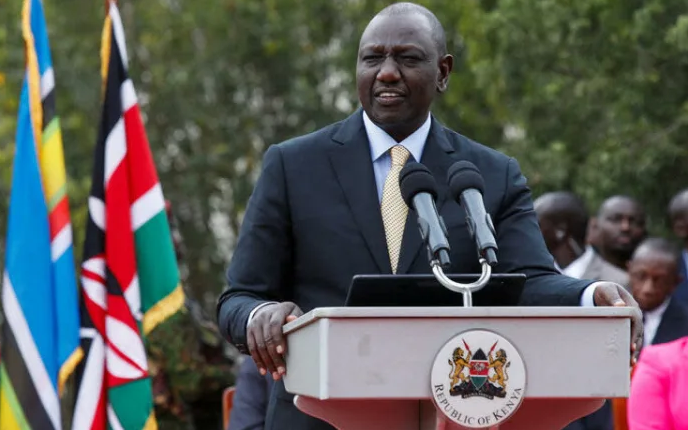 Mr. Ruto was handed a copy of Kenya’s constitution and a sword to represent the transfer of power from President Uhuru Kenyatta.

With his hand on a Bible, he swore to preserve and protect the constitution.

“Standing here today is testimony that there is God in heaven. I want to thank God because a village boy has become the president of Kenya,” Mr. Ruto said.

He also had conciliatory words for Mr. Odinga, and all his opponents,

“Their supporters will be my constituents. I will work with all Kenyans irrespective of who they voted for,” he said.

Unanimous Judgment
Meanwhile, Mr. Odinga was not present at the inauguration despite receiving a call from Mr. Ruto inviting him.

He said that he would not attend as he was abroad and he did not believe the election was free and fair.

The Supreme Court handed down a unanimous judgment, confirming Mr. Ruto’s victory and dismissing Mr. Odinga’s concerns that the election was marred by widespread irregularities.

Mr. Ruto takes over the helm a week after the country’s top court threw out petitions challenging his victory.

He replaces Uhuru Kenyatta, whom he served as deputy since 2013, and will have to tackle a surge in food and fuel prices, high unemployment, and rising public debt used to finance development over the past 10 years under his predecessor.