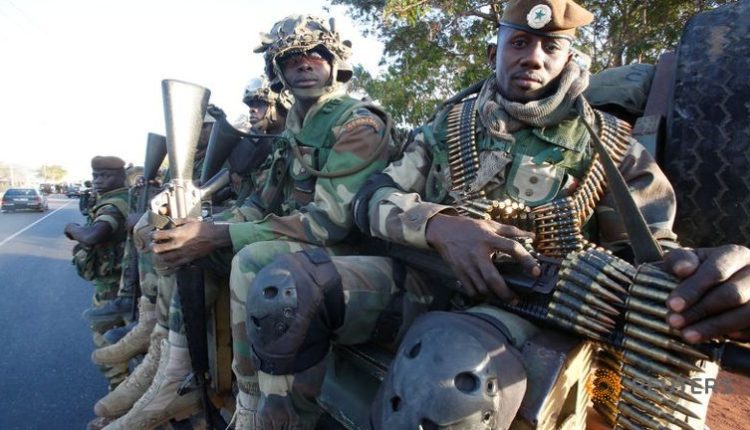 The Economic Community of West African States, ECOWAS, has completed the deployment of its standby force to Guinea Bissau.

The Chairman, Authority of Heads of State and Government of the ECOWAS, President Nana Akufo-Addo, who spoke at the opening of 61st Ordinary Session of the Community on Sunday, said that the standby force was deployed to support the stability of the country and President Mbalo’s elected government.

President Akufo-Addo said it has become necessary for the regional bloc to continue to implement its regional action plan against terrorism and to coordinate various security initiatives in the region.

“Faced with these constant terrorist threats, it is imperative for us to continue to implement our regional action plan against terrorism and to coordinate our various security initiatives.

“This will reinforce our collective response to this destabilizing threat.  Our determination in this area must be stronger than ever.  Equally unshaken must be our resolve to maintain the stability of our region and its member states.

“Indeed, following the failed coup d’etat of 1st February 2022 in Guinea Bissau and our emergency summit of 3rd February 2022, we decided to deploy an ECOWAS Standby Force to support the stability of the country and President Mbaly Sissoko’s elected government.

“That deployment of 609 security personnel, composed of 150 Nigerian troops and 140 Nigerian police personnel, 150 Senegalese troops, 100 Ghanaian troops and 59 troops from Cote d’Ivoire, with a force headquarters of 80 officers drawn from across the region, under the overall command of a Nigerian general and force commander has now been completed.”

President Akufo-Addo urged West African leaders to go the extra mile to ensure the stability of the community and of its member states.

The ECOWAS Chairman expressed the Community’s gratitude to President Muhammadu Buhari of Nigeria for co-ordinating the fightagainst the COVID-19 pandemic  in the region.

He said that President Buhari, as the region’s  “champion in the co-ordination of the fight against the covid-19, has spared no effort in this endeavour.”

Noting that the decrease in the number of new cases of the virus has led to the relaxation of some restrictive measures taken at the beginning of the crisis, President Akufo-Addo urged member states of the ECOWAS to remain vigilant as the COVID-19 threat is still around.

He said that the solidarity shown in management of the pandemic in the region illustrated “our organisations ability to unite our energies to face a significant common threat.”

Recalling the discussions taken at the Extra-Ordinary Summit of the ECOWAS on 4th June, 2022 in Accra on the political and social situations in the region, President Akufo-Addo said the body decided to re-examine the matter during the Ordinary Session.

According to him, the current political transitions in Mali, Guinea and Burkina Faso, emanating from the coup d’états in those member states, requires resolutions that will return them to democratic order.

“We have the opportunity to hear from our mediators who will advise us on the latest developments in these countries to enable us to take the appropriate decisions.”

The ECOWAS chairman said that the Russian-Ukraine war has led a sharp increase in global prices, particularly of food and petroleum products.

“We are all victims of global inflationary pressures, which have exacerbated the food crisis in many parts of our region, instigated by the decline in production due to the impact of climate change.

“We can best tackle this crisis by working to enhance the performance of our agricultural sectors to reach self sufficiency in the area of our food needs.”

He stated that summit would receive reports on the operations of the community, including that of the Chairperson t of the Council of Ministers on the administrative reforms that would be implement at the session.

“We will also hear a report on the selection of new commissioners of the Reform Commission for the period 2022-2026 and designate at this summit ECOWAS Champions in two fields of contemporary importance and relevance: climate change and the restoration of our cultural goods and our artefacts from those who seized them from us.”

While reminding the leaders that his two consecutive terms would end at the summit, Akufo-Addo pledged his commitment to the work of the Authority of Heads of State and Government of the ECOWAS.

In his speech, President of the ECOWAS Commission, Jean-Claude Brou pointed out that the region was still bedevilled by terrorism and violent extremism as a result of which people in the region have been threatened and attacked.

He said attacks by terrorists target frontline states such as Mali, Burkina Faso, Niger and Nigeria as well as coastal countries like Cote d’Ivoire, Togo and Benin.

He said in response to the situation, the ECOWAS was implementing the Regional Plan of Action Against Terrorism alongside Coordinated Actions in the West African Region and in the World.

Vice President Yemi Osinbjo is leading Nigeria’s delegation to the 61st Ordinary Session of the ECOWAS.