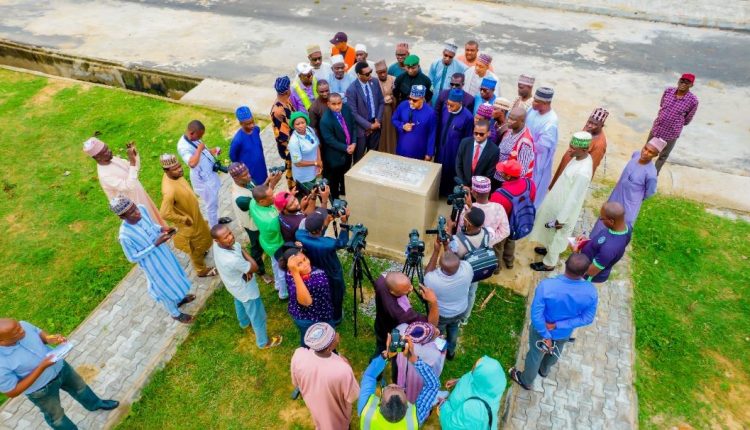 Nigeria’s Minister of State for Works and Housing, Umar El-Yakub, has promised that the Kano State Gwarzo Dayi road project will be completed before the end of this year

The Minister expressed his happiness and satisfaction with the State’s National Housing programme on the different configurations.

“I am indeed happy with the quality of work, landscaping and the infrastructure put up in these phases of NHP, the third phase of Kano NHP will kick off soon at Dawakin Tofa Local Government in Kano State,’’ he said

El –Yakub said the location of the programme is a welcome development in a decent environment with serenity,

“The choice of this site, we owe it to the Government of Kano State for giving us the opportunity to site this project on this very piece of land, I appreciate many policies and programmes of President Muhammadu Buhari, an unprecedented level of infrastructure has been delivered during this administration.“

He said the housing scheme was not only beneficial to the people of the State but to the people around the vicinity of the site, disclosing that over 70, 000 direct and indirect jobs were created, lives were impacted, and people’s economy has been improved as a result of the project.

The Minister while responding to the challenges of compensation for structures and land settlement along the Kano –Kastina road faced by the project contractor Messrs CGC Nigeria Ltd as explained by its Commercial Manager,  Mei Shou, said “We shall continue to engage the Kano and Katsina State governments so as to enhance the delivery period of our projects as the issue of compensation is been handled by the Ministry headed by Mr Babatunde Raji Fashola and it shall be resolved sooner than later.

El –Yakub said the importance of the project cannot be over emphasized, it is an interstate road that needs to be reconstructed, its one-way carriageway would be dualized after the completion of the project and the benefit of the road are enormous; it reduces the traffic on the street, it shortens the travel time which has an invaluable economic and social effect on the people.

He, however, expressed his dissatisfaction with the contractor handling the construction of the Kano Western By-Pass Road during his visit to the construction site, stating that government, stakeholders and the people of  Kano State are not happy with the slow pace of work on the road.

The Minister, therefore, urged the contractor handling the project, Dantata & Sawoe Construction Co. Nigeria Ltd, to redouble their pace of work reassuring them that their payments are been resolved.

Meanwhile, the Federal Controller of Works in Kano State, Yahaya Ali conducted the Minister round the project  of the  construction of Kano ( Dawakin Tofa ) –Gwarzo –Dayi Road, saying “It is a major route in the Northern part of the Country which links Kano with many States in the Northwest and North Central geopolitical zones.”