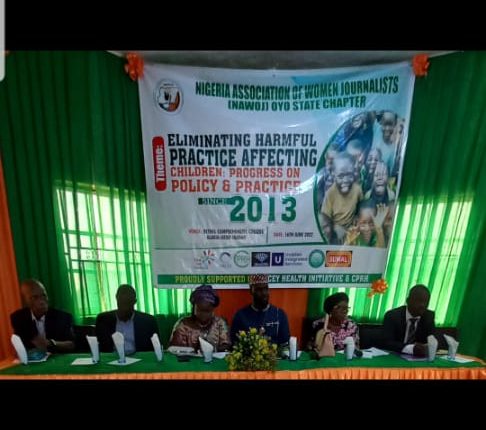 Stakeholders in child development, have urged parents and guardians to redouble efforts at protecting every African child by ensuring education about harmful cultural practices and abuses that may threaten their well-being either now or in the future.

The stakeholders made the call at an event to celebrate the 2022 International Day of the African Child, themed: Eliminating Harmful Practices Affecting Children, Progress on Policy and Practice Since 2013, held in Ibadan, the Oyo State capital.

The event organised by the National Association of Women Journalists (NAWOJ), Oyo State Council, in partnership with other organisations, had in attendance students, parents, teachers, Non-Governmental Organisations, policy makers, government representatives, politicians and youth organisations, among others.

At the event, the Oyo State Commissioner for Education, Science and Technology, AbdulRahman AbdulRaheem, harped on the duty of parents as role models to the children, maintaining that when children have good and proper upbringing, they go into the society as better representatives of the family and a positive influence on the larger society.

The Commissioner who was represented by the Permanent Secretary/Inspector General of Education, Ibadan Education Office, Zone 2, Mrs Ayobami Oluokun, said, “The Oyo state government has done a lot in ensuring that the Child Rights Act is not violated in Oyo state. Firstly, Oyo state is the first in the country to pass the Child Rights Act and today any child that is abused, there are laws that protects them.

“Presently there is an initiative against the abuse of the girl-child and every case of girl-child abuse is thoroughly followed, up so that the victim is resuscitated while the perpetrator is dealt with under the law.”

The Monitoring, Evaluation and Learning Officer of Hacey Health Initiative, one of the partners at the event, Oni Emmanuel Iyiola, while talking about the need for young people to speak out against harmful cultural practices, said educating students could go a long way in helping prevent the cutting of any girl-child in the immediate future and could equip the students to also serve as peer educator and influence on parents in the future

He said, “We live currently in a time that young people are becoming more culturally aware. It is important for us to let them know the cultures that need to be eradicated and the ones that need to be promoted. Female Genital Mutilation, as a long standing practice, is a culture that we must work together on all corners and angles to ensure that we eliminate or eradicate.”

The Guest Lecturer, Dr Kunle Awotiku, highlighted some of the challenges that children face, particularly the abusive practices that are not enacted in the Child Rights Law, such as verbal and psychological abuse, which prevent children from being the best they are supposed to be.

While emphasising the dangers of early child marriage, mutilation and rape, among others, Awotiku asserted that, attention should also be given to psychological abuse which children undergo, saying many children are being abused psychologically through words, with many parents not even knowing it.

He stated, “It is time for us not to speak against ourselves, not to body shame ourselves, not to say that a child is not good because of what they are experiencing or because they are late starters. If only we can embrace whatever we see from a child, we are heading towards getting the best from them. I was abused by some teachers in time past, but some of those teachers are my students today.” 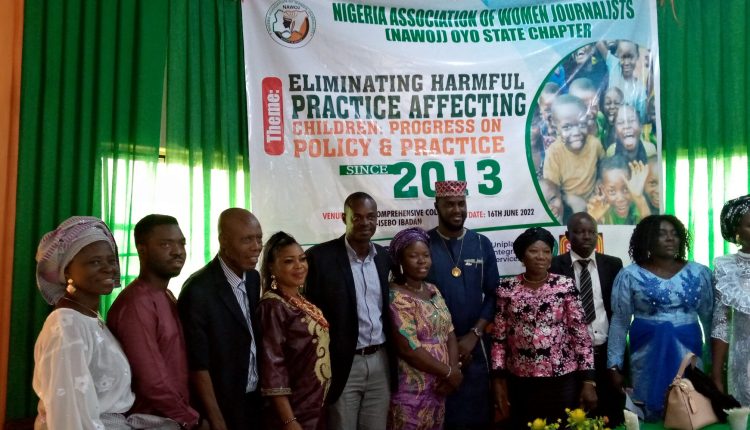 The National Secretary of NAWOJ, Comrade Helen Udofia, noted that the Association is worried that in different parts of the country, several harmful practices, linked mostly to economic, social and cultural norms, are still being meted out to children and have continued to impede the full development of the children.

Udofia said, “With the 2022 theme of the celebration as, Eliminating Harmful Practices Affecting Children, Progress on Policy & Practice since 2013, NAWOJ calls on the three tiers of government, agencies and organisations to reflect on the progress made towards the implementation of children’s rights, as well as the barriers they continue to face, with a view to ensuring full implementation of the rights of the child.”

The Chair person, Oyo NAWOJ, Comrade Jadesola Ajibola, disclosed that the motivation for organising the event is to celebrate the African Child and to sensitise children on the harmful effects of some cultural practices and social vices, calling for the involvement of everyone, so that untrained children would not negatively influence those that are trained.

She stated, “NAWOJ is using the opportunity of this occasion, to appeal to all stakeholders to protect an African Child. There must be safety for every African child today and always and we must do it collectively. If you think your child is safe in your home, trust me, those children we are not educating and sensitising, would influence and treat our children unfairly and it would come back to us again.”

Ajibola affirmed that, the society must find a way around ensuring that the African child is kept safe, protected and lives a meaningful life, in order to make life more meaningful and have a better society.