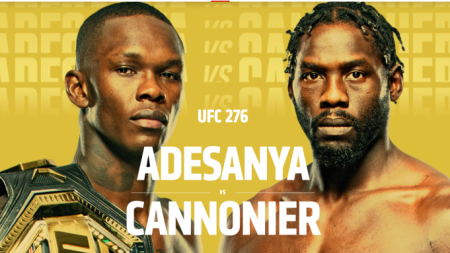 Jared Cannonier will finally have his shot at Israel Adesanya and the middleweight championship when the pair clash in the main event of UFC 276 at the T-Mobile Arena in Las Vegas on the morning of Sunday 3rd, July.

Adesanya (22-1) remains unbeaten at middleweight (his only defeat was against Jan Blachowicz at light heavyweight) and most recently put up a fourth straight successful defence of his championship when he beat Robert Whittaker via unanimous decision at UFC 271 in February of this year.

The 32-year-old Nigerian-born ‘Last Stylebender’ is seemingly untouchable at middleweight, but Cannonier (15-5) will be hoping for a major upset. The 38-year-old ‘Killa Gorilla’ from Texas has won five of his last six matches, most recently putting down Derek Brunson with an impressive second-round knockout to earn this shot at the belt

Whittaker, who has fought both men in the recent past, believes Cannonier could spring a surprise in this main event.

“I think Jared’s definitely got a chance,” explained Whittaker, who handed Cannonier his only defeat in the past four years. “He’s an absolute killer and you can see in the fights that he’s been in that he’s the type of guy that’ll go out on his shield.

“That’s a dangerous guy… but if you have to look at this stylistically on paper, Adesanya is just fast and rangy, and will be able to keep him at the end of his jab – that’s what I did to Jared. I stayed away, played on the outside… and that’s Adesanya’s fight game.” 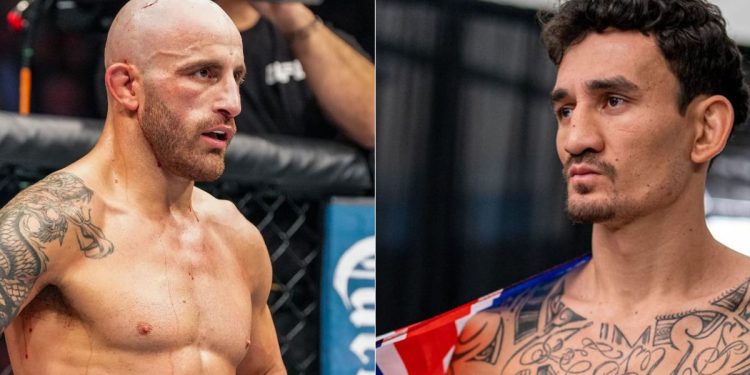 Another title fight – and one that is arguably even more mouth-watering than the main event – sees arch-rivals Alexander Volkanovski and Max Holloway complete a trilogy of featherweight title matches.

Volkanovski (24-1) has beaten Holloway (23-6) twice, first by unanimous decision to claim the title in December 2019, and then by split decision for his first defence in July 2020 – both fights are regarded as classics.

‘The Great’ has since gone on to mount two further successful defences against Brian Ortega and Chan Sung Jung in September 2021 and April of this year respectively, bringing his winning streak to 21 matches.

‘Blessed’, meanwhile, has since put up exceptional performances to defeat both Calvin Kattar and Yair Rodriguez via unanimous decision since his back-to-back losses to Volkanovski.

The 33-year-old Australian believes he will be regarded as one of the greatest of all time in MMA should he put away Holloway once again.

“I beat him three times in his prime… how do I not take that GOAT status? This is what’s good about this fight,” Volkanovski explained.

“You and everyone are going to say that I’m the GOAT, I’m the pound-for-pound No 1 – look at what position this one will put me in, because look at what position he’s in and he’s gone on a tear as well with wins himself, so this certainly makes this fight better and only puts me in a better position if I get another win over him right now.”

The rest of the main card features a middleweight clash between Sean Strickland and Alex Pereira; Lauren Murphy v Miesha Tate in the women’s flyweight division; and a bantamweight opener between Pedro Munhoz and Sean O’Malley.