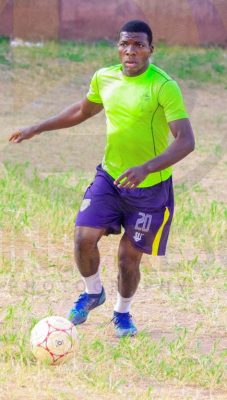 Ilihas said this when he spoke to VON at a football clinic organized by Asportrophy football agency in Abuja.

He noted that his dream would become a reality because he was focused on improving his skill set to go the distance.

At present he plays as a central midfielder for Dynamic Football Academy in Lagos.
“Football is something  I do which gives me joy a lot ever since I was a kid. And again, Having the right kind of mindset is really a means of strength and vitality that makes me wants to be the best and it has always been my thought ever since i choose the game has a career,” Ilihas said.
“Secondly, the kind of passion I have for football has always been the most powerful force pushing me to become an athlete. Of a truth, that has been the major reason why I can’t quite no matter the circumstances around me.
“Finally, I came from a poor family and I love helping people around me of which I don’t have money to do that now. Well, I strongly believe that God is on my side and playing football will continue to be my primary assignment till I reach my set goals in life. The only thing I believe can end my current challenges and give me much money that will support my vision I have for humanity is football,” he concluded.

Many football analysts have complained about dearth of natural playmakers for Nigeria’s national teams – with fans complaining that most teams put out by the country are not entertaining like their counterparts of yesteryears.

Since the retirement of legendary Austin ‘Jay-Jay’ Okocha and John Mikel Obi, there has been no firm playmaker for the Super Eagles – not even the junior football teams.

Ilihas said he intends to make his break in Nigeria’s NPFL before heading out to Europe – with Chelsea his preferred destination.
flying EaglesGolden EagletsNFFNigerian FootballSelim Ilihassuper eagles