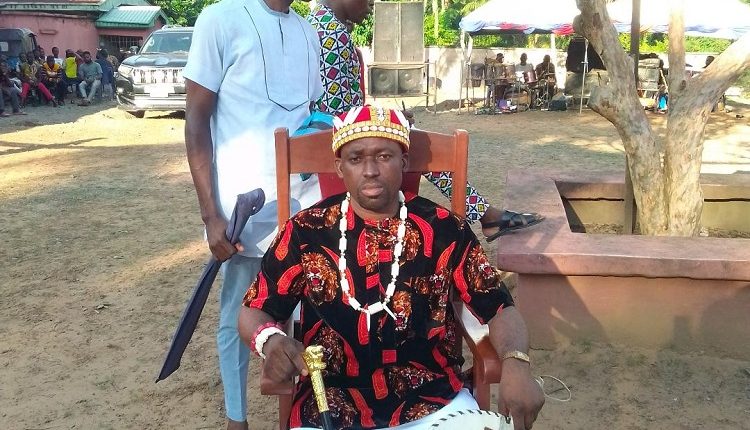 The Traditional Ruler of Amoffia Uduma Elechi Autonomous Community, Chief Ubaka Okpuru has promised to use the Culture of their land which is enriched with morality to change the negative attitude among some of his people to positive behavior.

Chief Ubaka made this pledge during his coronation as the Onochirinnaya 1 of Amoffia kingdom in Ohaukwu Local Government Area of Ebonyi State.

The Traditional Institution of Amoffia Uduma Elechi Autonomous Community has enthroned the Regent of the Community Chief Ubaka Okpuru for the Traditional Rulership of the kingdom.

The coronation is a traditional rite that must be performed as the culture of the Community demands.

The Regent who was finally crowned today, Chief Ubaka Okpuru said, as the Custodian of the culture of his people, that he is going to use his good offices to abolish all the parts of their culture which is harmful and will only sustain the good ones.

“I was born into Christian home and was trained as such, so my Leadership is going to be based on the principle of fear of God and nothing More”

“Humility is going to be my watch word as I am going to serve the people of this community and beyond with humble heart”. Ubaka added.

The Chairman of the Coronation Ceremony, Chief Benard Otubo said the significance of the cultural fulfillment to the Regent at Amoffia in Ohaukwu Local Government Area of Ebonyi State is in accordance with the cultural norms of the Community.

Chief Otubo said such a cultural rite has been in place in Royal homes for ages.

“I am very glad that this is taking place today in the life of my good friend, Chief Ubaka Okpuru and I pray that God shall continue to sustain him and his family till he reaches  to the Apex of his dream”. Otubo expressed.

The Elder of the Kingdom, Chief Onwe Egede, who performed the Coronation said the crowning is necessary as it helps them to uphold the cultural norms of their community.

“Culture is one of the things that can shape your life and behavior as well”. Onwe informed.

The Coronation Ceremony was attended by people from different works of life devoid of political parties as members of the All Progressives Congress (APC), The People’s Democratic Party (PDP), Labour Party (LP), and others were there.

The Coronation also witnessed the award of the Chieftaincy title to the Governorship Candidate of the People’s Democratic Party PDP, Dr. Ifeanyi Chukwuma Odii, who was represented by his Running mate, Senator Paulinus Igwe Nwagu who was given the title of Ozoigbondu 1 of Mgboejeogu.

On his part, a member of the Community, who is a Medical Expert, at Government House Clinic Abakaliki, Scientist Simeon Ituma said it is pertinent as their Regent was crowned today.

“I Simeon Ituma has been a member of this Community and the father of Chief Ubaka, late His Royal Highness Eze John Aguta Okpuru has been leading us well in this Community as our Traditional ruler devoid of crime or impunity, infact he was a good man. ’’By their fruits, we shall know them’. I don’t need a priest to tell me that Ubaka his Son will even lead the people of the community more than his late father”. Ituma said.

He called on the other members of the Community to throw their support behind the new king.

It would be recalled that Chief Ubaka Okpuru has been a Regent of the Community since the death of his late father, His Royal Highness Eze John Aguta Okpuru till today when he has been crowned.